ISIS is now recruiting in China 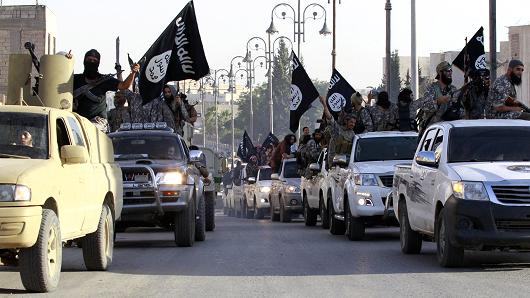 Terrorist group Islamic State (ISIS) is now recruiting in China, expanding its drive to attract fighters from all over the world, according to media reports.

The song, entitled “I am Mujahid” (someone engaged in holy war), features a single male voice calling for “Muslims brothers to awaken” and take up weapons. “To die fighting on the battlefield is my dream,” and “No force can stop our advance” were other lines in the song, according to Reuters.

The chant was posted online on Monday by Al Hayat Media Center, the foreign-language media division of the Islamic State, SITE Intelligence said in a Tweet Monday.

It is unknown how many Chinese Muslims have joined ISIS, but the treatment of Muslims in China – notably, Muslim Uighers in western China who are often discriminated against – has been criticized in the past.

As such, ISIS could be trying to attract disaffected Chinese Muslims to the group which is primarily based in Syria and Iraq and is trying to expand its self-proclaimed caliphate.

China has criticized Western airstrikes in Syria, saying a political solution was the only way to resolve the country’s civil war, but has become indirectly involved in the conflict. Last week, ISIS executed a Chinese hostage along with a Norwegian, according to various news reports, after it said no one had come forward to pay the ransom for their release.

Responding to the recording, China’s Foreign Ministry said that it highlighted the need for closer global cooperation against terrorism.

Foreign Ministry spokeswoman Hua Chunying said she could not comment on whether the recording was issued by ISIS, but said it showed that “terrorism is the common enemy of mankind” and the need to stop extremists using the internet, Reuters reported.