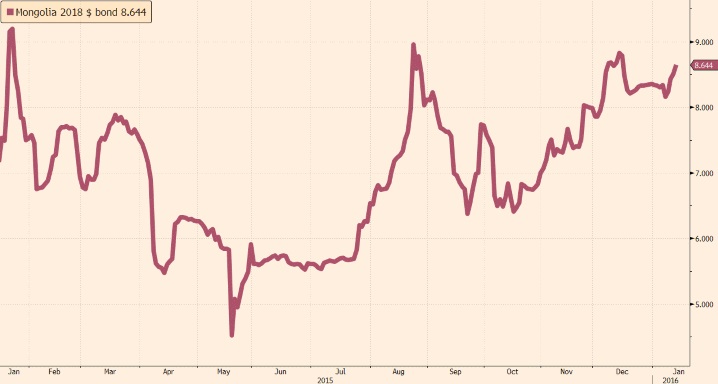 Mongolia is looking to take the plunge into the international bond markets for the first time in just over three years.

The landlocked mining-focused economy has got a number of Western banks on board to arrange investor meetings next week, writes Joel Lewin.

Mongolia last tapped dollar bond markets in late 2012, offering $1.5bn in debt that earned the moniker ‘Genghis bonds’. At the time, it managed to borrow at a lower yield than Spain. Now, the yields stand at 8.64 per cent, up from 4.5 per cent as recently as May.

Sentiment towards emerging markets has been heading rapidly south over the last 12 months amid a US rate rise, slowing growth and a commodities rout, which has certainly done no favours for Mongolia, where mining accounts for about a fifth of GDP.

The cost of borrowing in dollars for developing countries has jumped over the last year, and any looking to issue bonds face a potentially tricky task getting investors on board.

Last year, Ghana had to offer 10 per cent to borrow $1bn in 15-year debt, far higher than expected, while Iraq, Kurdistan and Pakistan were forced to rethink borrowing plans as a slowdown in China, a rise in official US borrowing costs and falling commodity prices diminished demand for their bonds.