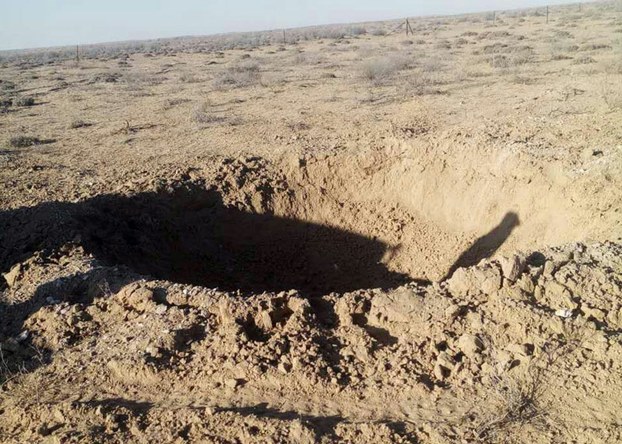 Ethnic Mongolian herders in northern China are protesting the use of their traditional grazing lands for military weapons testing, as authorities elsewhere in the region detain at least 10 people for giving interviews to overseas media.

Dozens of herders in Inner Mongolia’s Alshaa (in Chinese, Alashan) League Left Banner gathered outside the offices of the banner, or county, government on Monday in protest recent missile tests on local grasslands by the People’s Liberation Army (PLA), herders told RFA on Tuesday.

“We hear [the explosions],” an Alshaa resident said. “Every day, they fire off several dozen missiles; they’re still doing it right now.”

“They drive out on the grasslands in vehicles carrying the missiles, and drive around the place [firing them],” he said. “They have made tracks where there were no roads before, all over our grazing lands.”

“Recently, they have been firing off missiles just 200 meters from where there are herders living,” the herder added.

Photos of the scene sent to RFA by local residents showed grasslands turned to dust, scored with tire tracks and pocked with small craters, as well as debris that appeared to come from spent military hardware.

Herders are also protesting the non-payment of subsidies promised by the government as compensation for a grazing ban on their lands, they told RFA.

“We haven’t received any of our compensation payments for a year now,” one herder said. “Thee were several dozen of us demanding payment outside the banner government yesterday.”

According to the New York-based Southern Mongolian Human Rights Information Center (SMHRIC), the herders were detained on Monday and released only after “several hours of interrogation.”

“Many other herders received threatening phone calls from the local police authorities warning them not to contact any foreign news media or overseas organizations,” the group said in a report on its website.

“Then they wanted to check my cell phone activities. I refused,” Tuyaa added.

An elderly local resident told SMHRIC: “I was also threatened by phone, and my daughter was taken to the police station.”

The detentions come after Darhan-Muumingan herders gathered outside government offices, also in protest at non-payment of subsidies, the report said.

Herders are often banned from grazing their livestock on traditional grasslands where they have lived for generation, ostensibly to prevent erosion, desertification and livestock diseases.

But the government has announced long-term plans to move all traditional nomadic groups into permanent, urban dwellings, and herders say the bans are often a pretext to allow Chinese mining and forestry companies to exploit natural resources.

Dozens of Mongolian herders from Darhan-Muumingan Banner have also gathered in front of the Banner government building in protest at non-payment of subsidies.

“It’s nearly [Chinese] New Year and the herders have no money,” Mengke said. “We haven’t received our subsidies for six months or more.”

He said apparent changes to the local climate have made matters worse.

The Inner Mongolia regional government is currently implementing a three-year “upgrade” program, including the demolition of buildings “at risk of collapse,” securing safe drinking water and the urbanization of rural communities.

It aims to speed up the urbanization of traditional ethnic Mongolian herding communities, offering lump sum payouts of around 10,000 yuan (U.S.$1,500) per household.

Herders blame the ongoing exploitation of natural resources by Chinese companies for the spread of grasslands-related protests in the region, as local governments sell off land to investors, often in the mining or forestry sectors, and sometimes in the face of existing “responsibility contracts” held by herding communities for the land.

In China, all land is ultimately owned by the state, so herders have little redress when it comes to safeguarding their own grazing rights, they say.

Reported by Qiao Long for RFA’s Mandarin Service, and by the Cantonese Service. Translated and written in English by Luisetta Mudie.