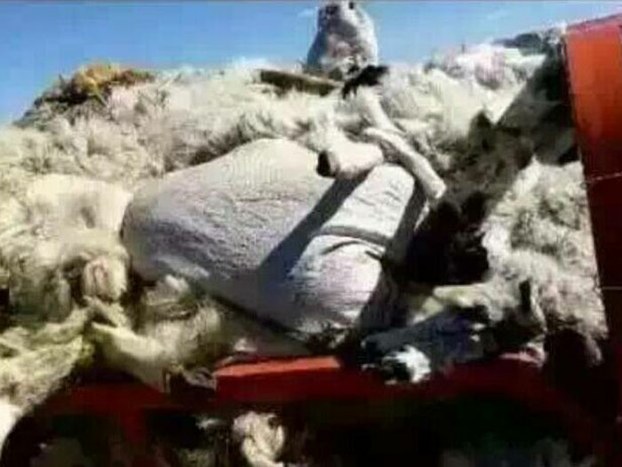 Hundreds of ethnic Mongolians in the northern region of Inner Mongolia are staging protests over pollution from alumina plants near their traditional grazing lands that they say is making their livestock sick, herders told RFA.

More than 300 Mongolian herders from the region’s Zaruud Banner (Zaluteqi in Chinese) began protesting on Friday in front of smelting plants in neighboring Huuliin-gol.

The herders tell RFA pollution from the plants is contaminating their grazing land and poses a serious threat to the health of both the herders and their livestock, they said.

Police turned back a convoy of more than 100 herders in dozens of trucks on Monday after they tried to protest outside one of three plants they blame for high death rates among sheep and high cancer rates among local people.

“Herders from Arikunduleng township in Zaruud Banner tried to go to the alumina plant,” one herder told RFA. “We were on our way, but we were stopped at a tollbooth on the expressway,”

“The herders are all trying to get to the plants but the riot police are blocking their way,” said the herder who spoke on condition of anonymity.

Despite fears of a government crackdown, the herders began the latest in a string of protests against local pollution on Friday.

“Mongolians and Han Chinese are all affected in the same way,” a local resident who declined to be named told RFA following protests at the weekend. “There has been huge environmental destruction here, but the herders daren’t speak out, because they’ll be targeted by the authorities.”

She said there are currently concerns over the fate of 20 local residents who traveled to the regional capital, Hohhot, to lodge a complaint.

“They are being followed everywhere closely by police, including the … Inner Mongolia state security police,” she said.

More than 300 herders clashed with police over the weekend following a string of protests outside the Huuliin-gol Alumina Refinery, rights groups and activists said.

According to ethnic Mongolian scholar Huubis, the dispute is the culmination of more than 10 years of complaints from local residents over pollution from the plant.

“The pollution has already gotten to the point where it’s a threat to the health of both man and beast,” Huubis said. “The people all have misshapen teeth, and the bones and teeth of dead animals have been found to have an unusual color.”

He said local officials had done little to help.

“The government is only concerned with pursuing economic interests nowadays,” Huubis said. “The local people have been lodging complaints for years, but [officials] lie, and cover up and protect the status quo.”

He called for an independent inquiry into the problem.

“They should come here and carry out medical checks, and be open about the problem,” Huubis said.

An official who answered the phone at the Zaruud Banner government offices on Sunday said the alumina plant was in a separate jurisdiction to that of the protesting herders.

“There is definitely pollution from Huuliin-gol; we know about that,”

the official said. “The smoke and so forth from the plant has been polluting Zaruud Banner, and I think the herders from Zaruud were petitioning about that.”

He said local officials “don’t have all the details yet,” however.

“If you want to know more, you should call up the Huuliin municipal government.”

A former Zaruud resident said he had left the area because of high cancer rates among local people.

“The rate of cancer among local herders is clearly high because of the waste from that alumina plant, including stomach, esophogeal and lung cancers,” the former resident said.

“As soon as you get near it, you can smell the stink of it, and you start to feel the nausea.”

He said he had moved to a healthier part of the region.

“I saw how high the cancer rate was, and I couldn’t tell the factory to leave, so I had to leave,” the former resident said. “When people complained, the authorities told them to produce data, but where were they going to get figures from?”

“Wherever they go to complain, they are told that petitions aren’t accepted at higher levels of government.”

Nearly 20 herders from Zaruud Banner’s Ar-Hundelen Som, a grouping of yurt ‘villages’ on traditional grazing lands, were beaten up and thrown into a police bus before the rest of the protestors managed to rescue them from arrest and possible detention, according to the U.S.-based Southern Mongolian Human Rights and Information Center (SMHRIC).

Herders told the group they are calling on the government to close three alumina plants.

“[They] are dumping toxic wastes into our land, water, and air and poisoning us herders and our livestock,” SMHRIC quoted another local resident as saying.

Video shot by protesters and posted on SMHRIC’s website showed riot police forcefully dragging herders toward a bus, while local police tried to confiscate the cell phone used to take the video.

“Riot police beat us with their shields and batons in an attempt to block us from marching toward the refinery’s main gate,” Zaruud herder Altanbagan was quoted as saying.

“Some herdswomen were surrounded by many police and were kicked and punched by them before they were thrown into the bus.”

An officer who answered the phone at the nearby Arikunduleng township police station said all those detained over the weekend had since been released.

“That’s right, they’ve been released,” the officer said, also agreeing that pollution in the area was “very serious.”

Herders told SMHRIC their sheep and goats are dying in large numbers, while some have abnormally long teeth that have been linked to high levels of fluorine in water, soil and grass.

Herder Altanbagan told SMHRIC: “Our health is threatened, our livestock is wiped out, our land is destroyed, our community is torn apart, and our lifeline is cut off.”

Reported by Qiao Long and Xin Lin for RFA’s Mandarin Service, and by Wong Siu-san and Wong Si-lam for the Cantonese Service. Translated and written in English by Luisetta Mudie.