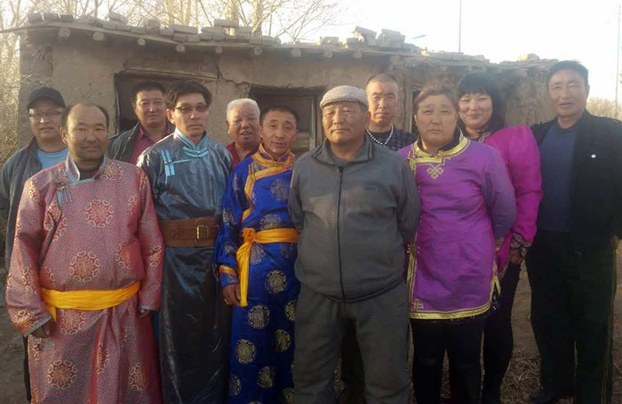 Chinese authorities are stepping up a crackdown on rights activists and lawyers who are trying to help Inner Mongolian herders embroiled in a bitter protest over the contamination of their grazing lands, sources told RFA.

The moves come amid ever-tighter security in Ar-Hundelen township in the region’s Zaruud Banner (Zaluteqi in Chinese), where local residents are demanding compensation for the damage to their health and their live stock that they blame on widespread industrial pollution caused by nearby alumni smelters.

“Four lawyers who were heading towards Zaruud to offer legal advice to Ar-Hundelen herders have been stopped by police,” a local resident who declined to be named told RFA. “Two others are being followed, it seems, so they can’t continue their journey here.”

Zaruud police last week detained herder Nasanulzei after he publicized video footage of piles of his sheep with deformed teeth as they lay dead and twitching, while hundreds of Ar-Hundelen residents have stepped up protests since the beginning of this month over pollution of their traditional grazing lands.

Germany-based ethnic Mongolian activist Xi Haiming said the lawyers had hoped to advise herders on how to use China’s environmental laws to advance their dispute through the courts.

“It’s a favorite slogan of President Xi Jinping’s that China must be ruled by law, so that’s why the lawyers were heading out there,” Xi said.

“It was perfectly right and proper for the lawyers to do this, but the government just wants to put a lid on this protest,” he said. “They don’t want the herders to have any contact with the outside world.”

“The fact that they have interfered with the lawyers just shows how hypocritical the [ruling] Chinese Communist Party is when it comes to the rule of law,” Xi added.

“They are trying to cow the local population into submission, by forbidding them from posting things online,” said a source who spoke on condition of anonymity. “They are stopping them from speaking out.”

Meanwhile, ethnic Mongolian rights activist Xinna, who recently gave interviews about the Zaruud protests, said she was threatened with imprisonment if she continued to highlight the herder’s plight to the outside world.

Under the terms of a previous suspended jail term, Xinna could face re-imprisonment for up to 20 months after for firing off social media posts defending her son Uiles, who has been targeted on alleged drug charges after his activist father Hada was jailed for subversion.

“At first they tried to use drug charges to threaten me, and tried to get me to do a drug test, but then they were shamed after I wrote about it online, and they came up with a new way [of giving me trouble],” she said. “Now they have cut off my communication links with the outside world, and I know the police are monitoring my phone line.”

However, one of the herders Xinna has helped in the past sent her an anonymous message urging her to stay out of jail, she said.

“You are still able to act fairly freely at the moment, but if you lose that freedom, there are many things that you will be forced to give up,” the message said. “It is a small compromise to take the hint [from the authorities].”

“It’s already hard enough for the herders to make their voices heard, and their interests will receive limited protection if you are still able to exercise a limited amount of freedom,” it said.

Local police and government officials in Ar-Hundelen have confirmed to RFA that there is a serious pollution problem in the area, but they say the smelting plants are located in a separate jurisdiction.

Rights activists say pollution from three alumina plants in an industrial zone in Huuliin-gol is posing a huge threat to human and animal health, causing higher-than-average cancer rates in the local population, and long-tooth deformities in sheep.

Nasanulzei’s detention came after he released a cell phone video showing piles of dead or twitching ewes and lambs recently poisoned by soil and water pollution.

Local herders are calling for transparency, for compensation for lost livestock, and for free medical checks for themselves.

Security remains tight in the region, where police sealed off local roads to prevent local herders from traveling to the smelting plants to continue their protests, local sources said last week.

Reported by Qiao Long for RFA’s Mandarin Service, and by Wong Si-lam for the Cantonese Service. Translated and written in English by Luisetta Mudie.