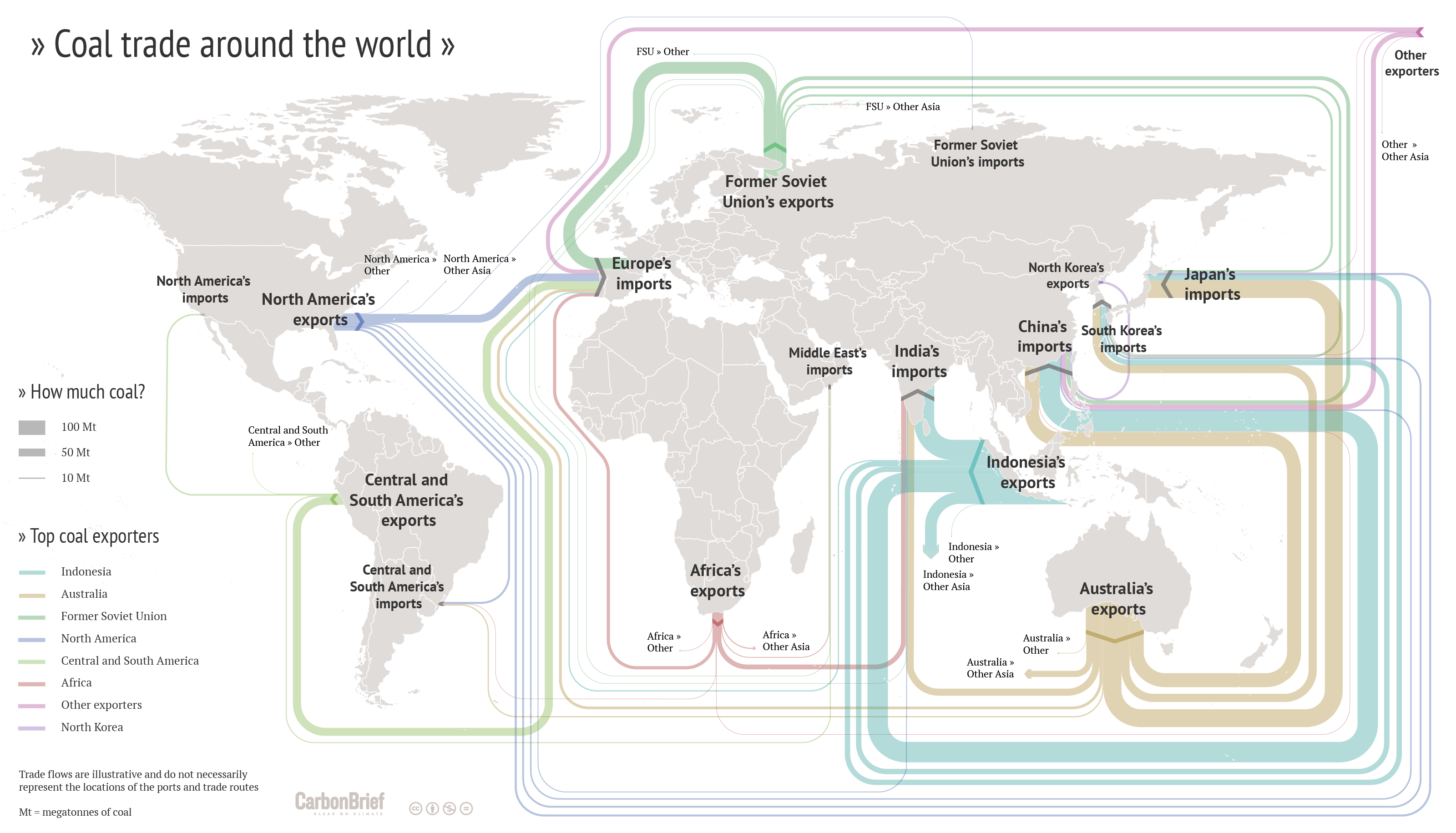 The global coal trade doubled in the decade to 2012 as a coal-fueled boom took hold in Asia. Now, the coal trade seems to have stalled, or even gone into reverse.

This change of fortune has devastated the coal mining industry, with Peabody – the world’s largest private coal-mining company – the latest of 50 US firms to file for bankruptcy. It could also be a turning point for the climate, with the continued burning of coal the biggest difference between business-as-usual emissions and avoiding dangerous climate change.

Carbon Brief has produced a series of maps and interactive charts to show how the global coal trade is changing. As well as providing a global overview, we focus on a few key countries:

The map above illustrates the global coal trade in 2014, the most recent year for which complete data is available. It should be immediately obvious that Asia is at the heart of this story.

Nearly 1,400 million tonnes (Mt) of coal were traded in 2014, with the majority flowing from the top two exporters: Indonesia (417Mt, worth around $20bn) and Australia (387Mt, about $35bn). Australian coal is generally better quality, hence the higher price per tonne.

Before we delve any deeper, it’s worth noting two caveats. First, this article is based on data from the UN Comtrade Database, a repository of official trade statistics. Reported imports in the database do not match reported exports, with a few large discrepancies. More on this below.

“The general view is that import data is better, because customs have an incentive to collect data for tax purposes. Exports data is generally poorer, as very few countries tax exports. So, the difference between exports and imports is no big surprise.”

Before 2010, less than 10Mt of lignite was traded each year. Lignite, also known as brown coal, has high water content and contains much less energy per tonne than hard coal. The 64Mt China imported in 2014, mostly from Indonesia, accounted for 90% of global trade in lignite.

Our map necessarily simplifies and amalgamates the number of global trade flows. You can explore the 2014 data in more detail, using this interactive Sankey diagram.

The second important caveat is that only a minority of coal production is traded internationally. The share is rising, up from 13% in 2000 to 17% in 2014. Still, most coal is used domestically, as the chart below shows. Falling trade volumes are bad news for exporters, but not automatically good news for the climate.

You can see that, overall, production and exports of coal have plateaued since 2012. Global coal use fell in 2014, a trend that accelerated through 2015, according to estimates from the German Coal Importer Association (VDKi). Exports have matched this pattern.

The International Energy Agency (IEA) says coal use could fall further by 2020, depending on what happens in China. However, coal use falls by two-thirds by 2040 in the IEA 2C scenario, designed to show how we could avoid dangerous climate change. This would leave nearly 90% of coal reserves in the ground.

Data on the global coal trade in 2004 offers some longer-term perspective to the 2014 map. A decade ago, Australia was the largest exporter by far; its 225Mt more than double second-placed Indonesia’s 106Mt.

More surprising, perhaps, is that China was, at that time, the world’s third largest coal exporter. It was then – and remains now – the world’s largest coal producer by far. Yet its consumption has risen so quickly since 2004 as to necessitate a switch from exports to imports to meet demand.

Note that the Netherlands, a major importer in 2004 and in 2014, is mainly a trading post for onward shipment to Germany. Note, too, that in 2004, the UK imported more coal than India.

Explore the 2004 data in the interactive Sankey, below.

Two countries have met most of Asia’s rising hunger for coal imports: Australia, where exports have doubled since 2000; and Indonesia, where they quadrupled. Russia has also seen strong export growth, much of it going to Asia, but also to countries such as the UK.

Vietnam, like China, has seen its status as an exporter eroded by rising domestic demand. Long seen as a major growth market for coal, in January its prime minister said coal would be dropped from future energy plans.

Mongolia has gone from near-zero exports to a 20Mt per year supplier to China. Exports from landlocked and geographically isolated Kazakhstan go almost exclusively to Russia, although it is looking to change this.

Meanwhile, exports from the likes of the US and Poland have been falling. The Polish government recently bailed out its struggling mining sector. In the US, reduced exports are being compounded by falling domestic demand. We’ll take a closer look at US exports in a moment.

First, though, let’s look at imports to China and India. In the 15 years to 2014, China accounted for 83% of the net increase in world coal consumption and it now burns half the world’s coal.

Despite Chinese coal production tripling during that period, it still needed to rapidly grow imports. Much of the increase came from Indonesia (see chart, below). Now, imports are dropping like a stone and it is Indonesia that is bearing the brunt of the reduction.

Chinese imports fell by a tenth in 2014 and by 30% in 2015, as a decline in domestic demand accelerated. The country plans to strictly control the capacity of its coal-fired power sector as part of efforts to tackle over-capacity, greenhouse gas emissions and air pollution.

An intriguing quirk of the Chinese import data is that it continues to buy large quantities of coal from North Korea (grey bars, below), despite sanctions imposed over nuclear testing.

India’s coal imports now rival, or even exceed those to China, having grown rapidly over the past five years. In the 15 years to 2014, India made up 14% of the net increase in global coal consumption, second to China’s 83%.

With Chinese imports falling rapidly, India was supposed to be the saviour of the global coal trade. A recent World Coal Association briefing says: “Like China before it, India’s economic growth will be fuelled by coal.” In December, World Coal magazine published a special report titled: “Why India’s coal imports will continue to grow.”

Data from 2015 shows imports did, indeed, increase compared to the previous year. However, imports are expected to fall in the financial year 2015/16. The reduction could be as much as 15%, says India’s Economic Times, following large falls in November and December.

Piyush Goyal, India’s energy minister, wants to cut imports to zero by raising domestic output. He has also said new coal power plants would be costlier than solar. Nonetheless, its coal production targets and even its climate pledge to the UN suggest its use of coal will continue to grow.

A significant discrepancy complicates the picture for India’s coal imports, which could be 20% higher than it reported. India says it imported 195Mt in 2014, whereas others report having exported 237Mt to India. The chart below shows this discrepancy for each year.

The discrepancies are the largest Carbon Brief has found in the Comtrade coal data. In some years, exporters reported sending more than 40% more coal to India than it reported importing (red line, below). The issue appears particularly acute for Indonesian imports.

It’s tempting at this point to note India’s political ambition to end coal imports. However, a more likely explanation lies in a $4bn customs scam, under which coal imports from Indonesia were over-valued. A fraud investigation, encompassing 40 of India’s largest energy firms, secured its first arrest in February, according to the Times of India.

Major US coal firms, such as Peabody, have faced a double-whammy of falling domestic demand and a shrinking export market. You can see the export part of the story in the chart, below.

The US electricity sector has been rapidly shifting away from coal in the face of reduced electricity use, cheap shale gas and the rise of renewables. These factors, particularly the shale gas revolution, are thought to have triggered a surge in exports of cheap US coal during 2010-2012.

As demand for coal imports declined in major European markets, such as the UK, exports to Asia were supposed to pick up the slack. Yet it was a bet on ever-rising Chinese demand that was arguably the cause of Peabody Coal’s demise.

UK coal imports increased in the early 2000s as domestic coal production continued its long decline. This week, protesters invaded the UK’s largest remaining coal mine in Wales. It is one of 26 operational opencast mines, with all deep mines having closed.

The glut of cheap US coal caused an increase in UK imports for a few years, but since 2013 demand for coal-fired electricity has been falling rapidly. Imports fell by two-fifths last year. Rather than importing coal, these days the UK mainly imports finished goods.

Ministers have promised to phase out unabated coal plants by 2025 and many power stations are already closing or scaling back output. For now, it’s worth noting that the UK buys most of its coal from Russia and Colombia.