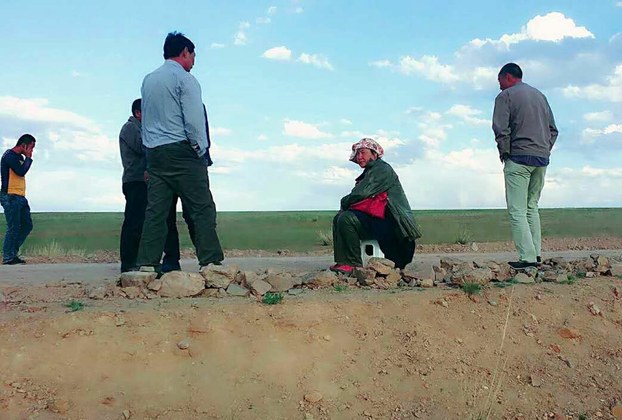 Ethnic Mongolian herders in China’s northern region of Inner Mongolia on Friday blocked construction traffic en route to a highway project in protest at the use of their grazing lands.

Herders in Bieligutai township to the southwest of Shiilinhot city in Inner Mongolia’s Shiilingol League are angry over what they say is the second encroachment by highway builders into their grazing lands this year.

“We are blocking the traffic here today because a lot of local herders don’t dare speak out,” local herder Ulanqiqige told RFA.

“They say they’ll only speak out when some journalists or other people who can help us resolve this are involved.”

“We are blocking … the road every day,” she said.

Local herders are angry that their village chief had commissioned the building of the highway without their knowledge or consent.

“He didn’t sign a contract with us, nor did he pay us any compensation,” Ulanqiqige said. “This is the second road they’ve built here this year.”

She said the road-builders had already placed stones to widen the road beyond its original specification, further encroaching on surrounding grasslands.

“The head of the construction team is our local People’s Congress representative, so [the government] says they can’t help us,” she said.

“But the roads are all dug out of our grazing lands.”

Both issues strike at the heart of traditional Mongolian nomadic lifestyles, activists have said.

Xinna said the Abag herders have a legitimate complaint.

“They have an agricultural production license for this land, which is also their home, but it’s not worth the paper it’s written on,” she said.

Xinna said the road protest isn’t the first in the Abag banner.

“A few years back, the authorities in their production brigade built a highway of dirt … which damaged the environment of the grasslands,” she said.

“Now, they are widening that road, and Ulanqiqige is trying to highlight this problem, because she wants them to pay compensation, which they should.”

Many of China’s ethnic Mongolian herders hold their grazing lands under “household responsibility” contracts, which typically last up to 30 years.

“These lands have been granted to the herders, and if they want to take them over, they must discuss it with them,” Xinna said.

The Abag protest comes after Chinese authorities detained 12 ethnic Mongolian herders amid a protest over the building of a highway across grasslands in Shuluun Hoh banner.

The activists were detained on May 21 after protesting that they graze the lands under a 20-year government lease.