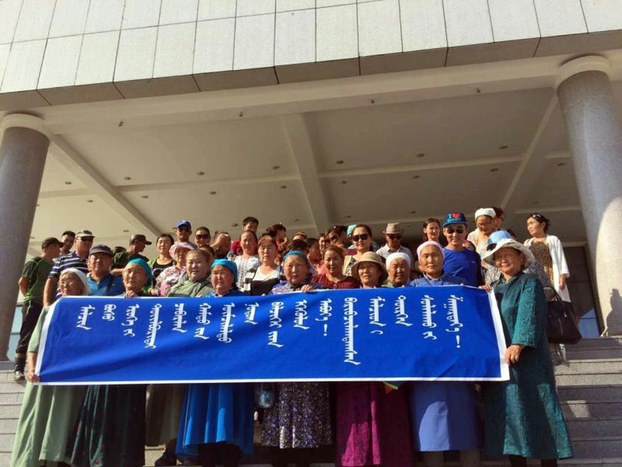 Chinese authorities in the northern region of Inner Mongolia have detained eight people in an eviction operation targeting a group of ethnic Mongolian herders and driving them from their summer pastures, activists and local residents said on Wednesday.

Ethnic Mongolian herders in the northern Chinese region of Inner Mongolia on Tuesday penned an open letter to the the regional government amid a bitter land dispute that has sparked violent clashes with the authorities in recent weeks.

Herders from Ubuurbarag village in Inner Mongolia’s eastern Shin-Barag Left Banner had called on the regional government to intervene to protect them after alleged attacks that left local residents injured and their livestock dead.

But the authorities moved on Wednesday to evict both herders and their livestock from the disputed land, which herders say they have grazed for generations under a legal contract with the government.

Bazhma’s sister-in-law said she was detained at around 9.00 a.m. on Wednesday.

“I got a call from people at the scene saying that my sister-in-law had been taken away by police,” said the woman, who declined to be named.

“Her kid is just eight months old, and there were a few other women they took, too.”

“They detained eight people in total,” she said, adding: “There were more than 100 herders gathered there late last night.”

Another herder who didn’t give his name said local officials had admitted that the herders had the right to use the grassland.

“They sent around a dozen vehicles this morning to detain people, then the banner police left, leaving six or seven vehicles,” he said, adding: “Eight herders were detained.”

The head of the government had visited the herders on Tuesday night, he said.

“He said that the grasslands do indeed belong to our collective farm, but that we had to move out anyway, as soon as possible.”

“The police told us we had 15 minutes to leave, when they came this morning.”

“There is still chaos at the scene, because the eviction work isn’t complete,” she said.

The detentions prompted several dozen herders to gather outside the banner, or county-level, police department calling for the release of the detainees.

Security is now “very tight” in the region, Xinna said.

“They have been detaining people, beating them up, and confiscating their cell phones, so they can’t get any information to the outside world,” she said.

Xinna’s husband, veteran Mongolian rights campaigner Hada, said the evictions are part of a calculated program of ethnic cleansing in the region.

“The aim of the Han Chinese is very clear,” Hada told RFA. “They want to eradicate the Mongolian nomadic way of life.”

“They’re not explicit about this, but that’s what they want.”

The eviction comes after more than 40 head of sheep were killed by unidentified occupiers of the land, using motor vehicles, local residents told RFA earlier this week.

But an official from the local government said the sheep were killed because they strayed onto the highway.

Ethnic Mongolians, who make up almost 20 percent of Inner Mongolia’s population of 23 million, increasingly complain of widespread environmental destruction and unfair development policies in the region.

Clashes between Chinese state-backed mining or forestry companies and herding communities are common in the region, which borders the independent country of Mongolia.