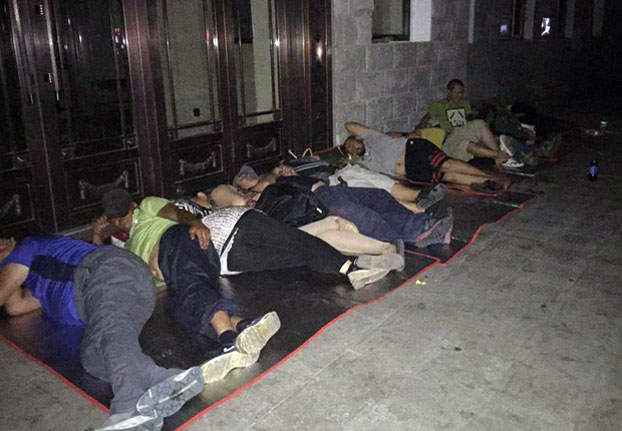 Ethnic Mongolian herders who marched on government offices, camping out in protest at being thrown off their grazing lands, have now been evicted from the premises, as the government banned social media posts relating to the land dispute.

After the evicted herders marched on the local government with banners, staging a sit-in, and sleeping rough outside the building, authorities moved in late on Thursday, herders told RFA.

“They brought in riot police from Manzhouli and Hala’er to drive away the remaining herders [outside government offices],” one of the herders told RFA on Friday.

Police seemed keen to avoid any footage of the incident from leaking out, the herder said, adding: “They snatched away and smashed up people’s smartphones,”

“The newcomers also sent people to attack our flocks of sheep,” the herder said.

The authorities have threatened to “deal with” anyone posting about the dispute on social media, sources said.

The banner-level branch of China’s powerful Cyberspace Agency issued a statement on state television forbidding anyone from tweeting or posting words or photos related to the Ubuurbarag land dispute.

“The police will be dealing appropriately with anyone responsible,” the statement said.

No answer to appeals

A second local resident said the authorities hadn’t yet responded to appeals and complaints by the herders over the loss of their summer grazing lands.

“There was no response yesterday evening to any of the points made by the herders, or to their complaints,” the second herder said.

“Their whole aim was to clear the area [of protesters]. There was no agreement reached between the two sides.”

He said some herders had been sleeping outside the government offices in the hope of having their complaints heard.

Ethnic Mongolian rights activist Xinna, who has been following the Ubuurbarag dispute, said police had used considerable force against the herders.

“They frightened and threatened the herders, and they used force to drive them away,” she said.

Local communications appeared to have been cut off, she said, adding, “I can’t get through to any of them by phone now.”

The move came in spite of appeals from the herders that their existing land-use contracts be respected, and that random attacks on them and their livestock from unidentified newcomers be stopped.

Police had detained 10 herders during the earlier eviction operation from their grazing lands, but released three after around 24 hours, local residents told RFA.

One of the detainees, Huubshalat, is facing charges of separatism, which carry a jail term of up to 10 years, sources said.

However, the fate of the remaining detainees remains unclear, a third herder said.

“The 24 hours is already up, and they still haven’t [been released],” she said. “Some of the families were given a reason for the detentions, while others weren’t.”

The area around the banner government offices is now under tight security, local sources said.

“I can’t even go out today,” a resident of Shin-Barag Left Banner town said on Friday. “They are checking ID’s across the whole commune and production brigade.”

“There are riot police all around the banner government.”

He said the government is now warning local residents by SMS message not to retweet information about the dispute.

“They are threatening us, saying that we will also be dealt with if we send out anything [on social media],” the herder said.