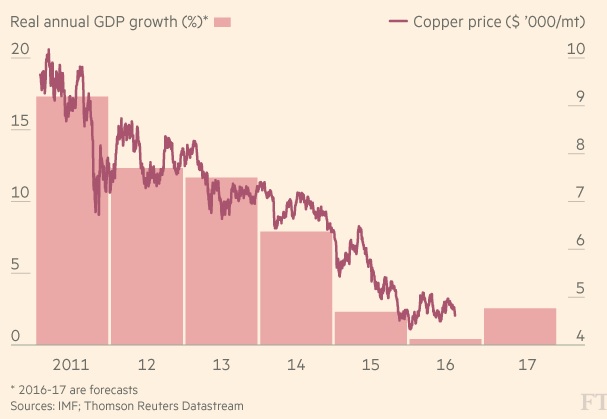 Mongolia’s new government has revealed a budget deficit equivalent to nearly one-fifth of economic output, underlining the dire financial conditions that have sent the currency tumbling.

Even after stringent cost-cutting measures outlined by the Mongolian People’s party, which won a landslide victory in last month’s elections, the country faces a gap between its revenues of MNT5.34tn ($2.67bn) and MNT9.7tn ($4.87bn) expenditure — a shortfall equivalent to 18 per cent of gross domestic product, well above the 4 per cent statutory limit.

Mongolia, with a population of 3m and GDP of some $12bn, is heavily dependent on mining and commodities exports, mostly to China. A surge of mining investment helped it repay previous IMF loans early, but the more recent downturn in copper and coal prices has dealt a heavy blow to the economy.

The country also faces hefty debt repayments beginning in March, when a $580m bond issued by the Development Bank of Mongolia comes due. It must repay $1.7bn-$1.8bn over the next two years, including a swap agreement with China’s central bank.

“Our priority is to bring discipline and order to our finances, to make sure the public gets the full picture and understands the reasons for our actions,” said Tsend Munkh-Orgil, foreign minister.

The budget includes cuts in civil service salaries, higher taxes and a later retirement age. Other social payments from funds set up during the height of the mining boom have run dry, including subsidies for students and the popular universal “child money” of MNT20,000 ($9) per month for every family.

“While we expected increased fiscal pressure, we did not expect the budget situation to be as critical as recently reported,” said Yolanda Fernandez, representative for the Asian Development Bank. “The government is going to face two challenging years.”

The Mongolian People’s party government has not formally requested assistance from international donors, but observers expect that it will after the budget is approved and the new government draws up a plan later this year.

A delegation from the International Monetary Fund also visited this month — Mongolia previously tapped the IMF in 2009 and paid off the $232m loan early thanks to strong prices for coal and copper, its main exports.

The government’s revelations have not surprised Erdenebayar, owner of a quiet lunch restaurant in the middle of the Ger District, the sprawling settlements that ring Ulan Bator, the capital. “I can tell from the sales I make and the lives of my customers,” he said.

Lunch patrons chimed in on the question of the child money and Mongolia’s high interest rates — raised to 15 per cent this month to staunch the currency tumble. Nergui, a single mother of five teenagers, said she was looking for extra hours at the wholesale market where she works as a cleaner and would recruit her children to take on some of the jobs. “The money was a big help for me,” she said. “Quite a few families I know only have child money to rely on.”

Nationwide, family income is down about 10 per cent year-on-year and unemployment is rising due to the downturn in mining and construction. “People say the government has a lot of debt and can’t pay,” Erdenebayar added. “The prime minister said it will stabilise by November, and I hope so. If not, the winter will be a lot worse than now.”