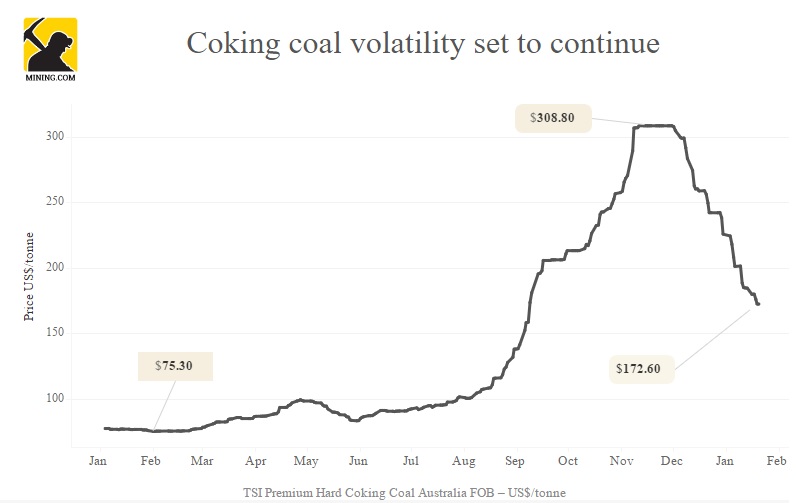 We’re only three weeks into the new year, but the year to date fall in the price of coking coal has already topped 23%.

At $172.60 on Friday the steelmaking raw material is now $136 below its multi-year high of $308.80 per tonne (Australia free-on-board premium hard coking coal tracked by the Steel Index) hit in November.

There was a more than $100 differential between the spot price average and the fourth quarter contract benchmark, but that situation has now completely reversed. Benchmark contract prices for the Q1 2017 were settled between Australian miners and Japanese steelmakers at $285 a tonne.

A recent note from the Singapore Exchange predicts that volatility in the met coal market will continue even after average daily spot price volatility for coking coal more than doubled in 2016 from 2015:

With uncertainty around Chinese policy decisions over implementation of the 276-day rule, and with its primary focus being on thermal coal, price volatility may remain one of the themes in the international coking coal market this year.

Quarterly price fix settlements generally following spot pricing, and greater spot price volatility has resulted in major divergences between what different regional steelmakers are now paying for their coking coal, which is likely to cause strains for some market participants.

The Steel Index monthly review noted that supply is beginning to respond to higher prices.

The US is expected to increase its coking coal production in 2017 and that around 9 million tonne of US met coal will be added to the export market. Companies such as Warrior Met Coal, Rosebud Mining and Ramaco already plan to start operations in the new year.

Australian coking coal mines owned by miners South32 and Anglo American are expected to once again produce at full capacity in 2017 following force majeure stoppages in late 2016, while Conuma Coal Resources is restarting production at its Wolverine mine in BC, Canada exporting around 1.5 million tonnes of coking coal a year starting in April.

Despite the pullback metallurgical coal is up 130% from multi-year lows reached in February last year. Coking coal averaged $143 a tonne in 2016 (about the same as it did in 2013). Consensus forecast is for the price to average about the same in 2017.

In 2011 floods in key export region in Queensland saw the coking coal price briefly trade at an all-time high $335 a tonne.