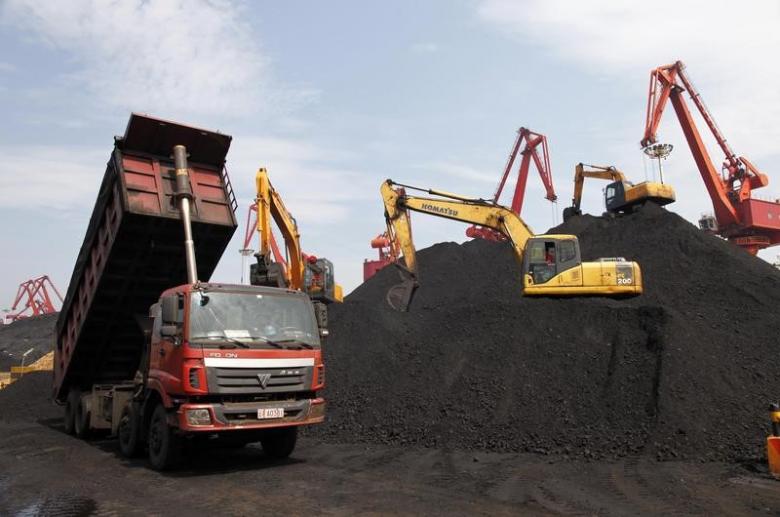 China’s coal imports from the seaborne market fell in April, with top exporting countries unable to fully cash in on the loss of Australian shipments in the wake of a powerful cyclone that knocked out mines and infrastructure.

China’s seaborne imports will be around 18.95 million tonnes in April, down from 19.5 million the prior month, according to vessel-tracking and port data compiled by Thomson Reuters Supply Chain and Commodity Forecasts.

Imports from Australia fell by a third to 5.67 million tonnes in April from 8.37 million in March, showing the impact of Cyclone Debbie, a category four storm that hit the major coal-mining state of Queensland on March 28, disrupting mines and shutting down most of the rail system.

Much of the coal exported from Queensland to China is high-grade coking coal used in steel-making, although the state also ships lower quality thermal coal mainly used in power plants.

The main beneficiary of Australia’s weather-related misfortune was Indonesia, the world’s top exporter of thermal coal, with vessel-tracking data showing its exports to China rose 37 percent to 9.49 million tonnes in April from March’s 6.93 million.

This was the highest level of shipments from Indonesia to China since December, and it’s possible the April figure could be revised higher in coming days as cargoes that arrived at the end of the month get added to the count.

China mainly buys low-rank thermal coal from Indonesia, which is often blended with domestic supplies before being burned to generate electricity. It’s therefore likely that some of the increase in imports from the Southeast Asian nation was more related to underlying demand for this grade of fuel, rather than as a result of the loss of Australian cargoes.

Major coking coal exporters also appeared slow to respond to the loss of Australian shipments, with the vessel-tracking data showing Canada boosted exports to China by 17.6 percent in April from March to 1.27 million tonnes.

Russia managed to increase its exports to China by 21.7 percent to 1.85 million tonnes in April from March, while imports from the United States fell by 64 percent to just 266,000 tonnes, or four cargoes.

While the percentage increase by Canada and Russia may look impressive, the volumes aren’t, with the gain in April over March from these two producers amounting to only 520,000 tonnes, or less than a fifth in the drop in imports from Australia.

What the data doesn’t show is coal arriving in China via rail and truck from neighboring Mongolia, another major source of imported coking coal.

Chinese customs figures for April will be available around the third week of May, but in the first quarter imports from Mongolia jumped 113.5 percent from the same period in 2016 to 8.14 million tonnes, which actually made the landlocked country the second-biggest supplier behind Australia and put it ahead of Indonesia in the first three months of 2017.

Perhaps the main takeaway from the April shipping numbers is how seaborne coking coal exporters struggled to ramp up output quickly in response to a supply shock, even though prices nearly doubled to close to $300 a tonne.

Years of low prices forced miners to cut operating expenses to the bone, leaving them ill-prepared to boost production if needed, as they lack readily-available equipment, labor and mine plans.

The problem for miners and exporters in the United States, Canada and Russia is that by the time they can boost production, it’s more than likely that Australia’s output will recover, causing prices to retreat back to levels where they can’t compete against the lower-cost operations of the world’s biggest exporter of coking coal.

It’s therefore likely that the May numbers will see some increases from the smaller shippers of coking coal, but by June it’s expected that Australia’s mines will be able to produce and export at normal levels.

This will once again make price the determinant in whether countries like Canada and the United States can export to China, with the current price of coking coal futures on the Singapore Exchange suggesting they still have a window of opportunity.

The contract, which is based on the spot free-on-board price from Australia, ended Tuesday at $197.19 a tonne, down from the cyclone-inspired peak of $285 but still comfortably above the $154 level just prior to Debbie’s landfall.