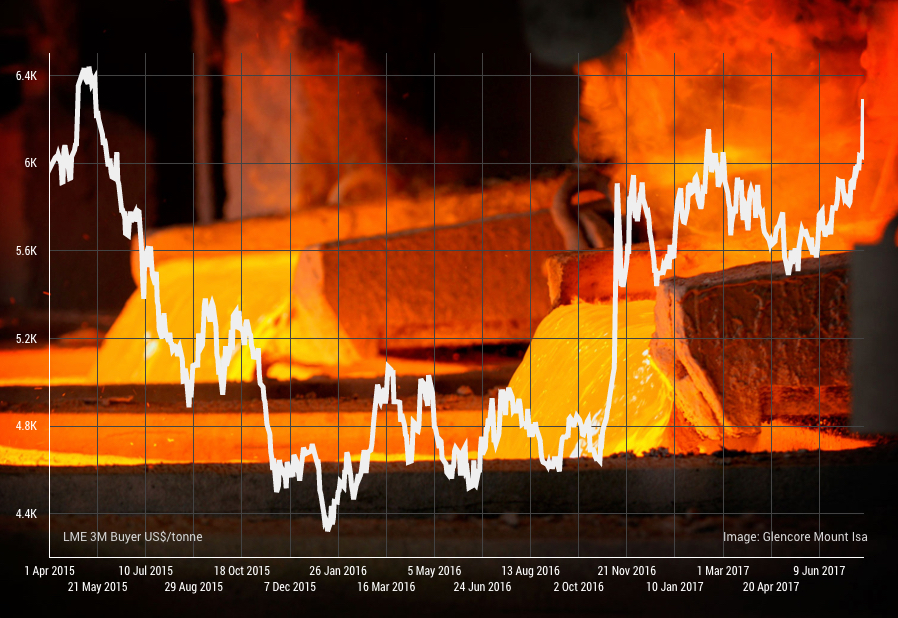 Copper futures trading on the Comex market in New York raced higher on Tuesday on renewed optimism about demand from top consumer China and indications of tighter global mine supply.

While Chinese imports of refined copper dropped in June and is down 18% over the first half of 2017 to 2.23m tonnes, shipments of copper concentrate continue to strengthen jumping 23% in June from the month before to 1.41m tonnes.

Another sign that primary copper supply is tightening treatment and refining charges levied by smelters for concentrate are declining. TC/RCs paid by mining companies are a good indication of conditions in the spot market and rates have now fallen by 10% from the start of the year to around $80 a tonne and are well below the price floor set by China’s major refiners for the third quarter.

Supply disruptions at some of the world’s biggest mines including BHP’s Escondida mine in Chile earlier this year and ongoing strike action at Freeport McMoRan’s Grasberg operations in Indonesia are also boosting the price.

Workers at Grasberg last week extended their strike for a fourth month to end August. Freeport’s temporary exporting licence is coming up for renewal in October, a bargaining chip used by Jakarta as it negotiates with the Phoenix-based company about divesting a majority stake in its Indonesian subsidiary.

Shares in Freeport jumped more than 15% to a 16-month high on Tuesday after the $21.5 billion company announced revenues that topped estimates and progress on talks with the Indonesian government. Grasberg was forecast to produce 680,000 tonnes of copper this year making it the world’s second largest copper mine after Escondida.

Shares in Freeport jumped more than 15% to a 16-month high on Tuesday after the $21.5 billion company announced revenues that topped estimates and progress on talks with the Indonesian government

The economy of China, responsible for nearly half the world’s consumption of copper, expanded at an annual rate of 6.9% in the second quarter against expectations of a slight decline and at a quicker pace than Beijing’s own target of 6.5% growth for 2017.

In seasonally-adjusted quarter on quarter terms, growth was even more significant, picking up from 1.3% to 1.7%. If the trend continues, this year would be the first time since 2010 that the Chinese economy grew faster than the year before.

Despite Beijing’s tightening of lending and other measures to cool the property market, construction starts surged by more than 14% in June, providing further support for commodity-intensive sectors which continue to expand at a faster rate than the broader measure of industrial production.

The copper price is seen as a bellwether for metals markets and industry as a whole thanks to its widespread use in construction, the power sector, manufacturing and transportation.