Copper price jumps to highest since 2014 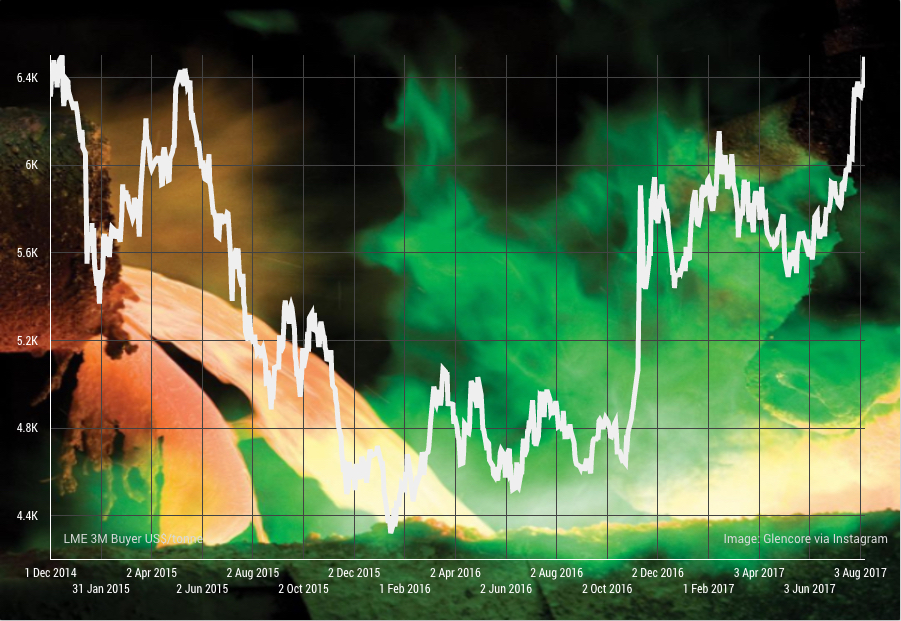 Copper futures trading on the Comex market in New York advanced for a third session on Tuesday after a rebound in imports by top consumer China.

In brisk volumes copper for delivery in September jumped to a high of 2.9455 a pound ($6,494 per tonne) in lunchtime trade, up more than 1% on Friday’s close to the highest since mid-December 2014.

Copper’s 2017 year to date gains in percentage terms now top 16% and the red metal has recovered more than 50% in value after falling to six-year lows below $2.00 a pound in January last year.

Chinese imports of refined copper increased 8.3% in July from a year ago, but cargoes remain down 15% over the first seven months of 2017 to 2.62m tonnes. Shipments of copper concentrate were unchanged in July from the month before and up 2.2% from July last year to 1.4m tonnes.

Year to date Chinese concentrate imports total 9.7m tonnes, not far off last year’s pace despite supply disruptions at some of the world’s biggest mines including BHP’s Escondida mine in Chile earlier this year and ongoing strike action at Freeport McMoRan’s Grasberg operations in Indonesia.

Workers at Grasberg have extended their strike for a fourth month to end August. Freeport’s temporary exporting licence is coming up for renewal in October, a bargaining chip used by Jakarta as it negotiates with the Phoenix-based company about divesting a majority stake in its Indonesian subsidiary.

2016 was a banner year for concentrate imports with volumes gaining 28% over 2015 hitting an all-time high of 16.96 million tonnes for the full year. Chinese imports compare to global mined production of an estimated 20.5 million tonnes per year.

Bart Melek, head of commodities strategy at TD Securities quoted by CNBC last week said copper could continue to rally but it could run out of steam later in the year:

“If we break through the current levels here, there’s a very robust resistance at $2.96,” he said. Melek said under the right circumstances, it could go to $3.2745.”