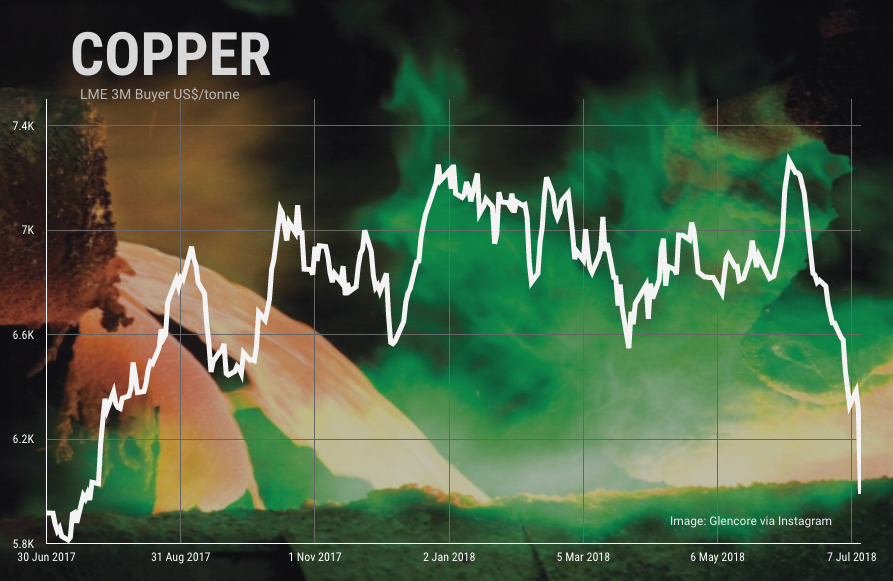 It was one of the busiest days of 2018 on commodity futures markets with with over 2.1m tonnes of copper worth $12.7 billion exchanging hands by early-afternoon. Wednesday was the ninth down day of the last 10 trading sessions for copper. The bellwether metal has declined by 18.5% just over the last month, dragging the base metal complex down with it.

Zinc is down 28% from its 2018 high, and cobalt is now trading down 24% from highs hit in March. Nickel is the only metal still in the black year to date but has retreated 14% over the past month dipping below $13,600 in London on Wednesday.

The trade dispute between the US and China, responsible for half the world’s consumption of copper, is quickly escalating and comes on top of sliding indicators of manufacturing and industrial activity in China. Due to its widespread use in manufacture, construction and electricity infrastructure, the copper price is often considered a gauge of broader economic activity.

Beijing has said it would hit back including through “qualitative measures,” a threat that US businesses in China fear could mean anything from stepped-up inspections to delays in investment approvals and even consumer boycotts

China has accused the US of bullying and warned it would hit back after the Trump administration threatened to slap new tariffs on an additional $200 billion of Chinese exports.

According to a Reuters report Beijing has said it would hit back including through “qualitative measures,” a threat that US businesses in China fear could mean anything from stepped-up inspections to delays in investment approvals and even consumer boycotts.

The Wall Street Journal, citing unnamed Chinese officials, said Beijing was considering steps including holding up licenses for US companies, delaying approvals of mergers involving US firms and stepping up border inspections of American goods.

China could also limit visits to the United States by Chinese tourists, a business state media said is worth $115 billion, or shed some of its US Treasury holdings, Iris Pang, Greater China economist at ING in Hong Kong, wrote in a note.

The $200 billion far exceeds the total value of goods China imports from the United States, which means Beijing may need to think of creative ways to respond to such US measures.

On Tuesday, US officials issued a list of thousands of Chinese imports the Trump administration wants to hit with the new tariffs, including hundreds of food products as well as tobacco, chemicals, coal, steel and aluminium, prompting criticism from some US industry groups.