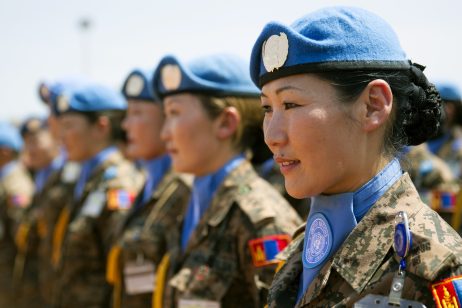 It took Mongolia 15 years from its first application to join the U.N. Mongolia’s repeated attempts to join the U.N. were challenged at every step, as superpower competition and geopolitical dynamics hindered these foreign policy goals. The Americans, Russians, and the Chinese were all opposed to Mongolia’s membership in the U.N. under different political circumstances and different timeframes.

Mongolia first attempted to join the U.N. in 1946, just after World War II. The Mongolians at the time believed that the change in world order was perhaps a chance to expand the country’s connections to the outside world.

On June 24, 1946, the prime minister of the Mongolian People’s Republic (MPR), Choibalsan Khorloo, applied for U.N. membership. Given the post-war mentality, the five permanent members – the Soviet Union, China, the United States, the United Kingdom, and France – were occupied with agendas of their own, which did not directly concern Mongolia. In July 1946, the U.S. representative to the United Nations, Herschel Johnson, supported the entry of a bloc of states – including Mongolia, as well as Afghanistan, Albania, Ireland, Portugal, Spain, and Sweden – into the United Nations. However, A.A. Gromyko, the Soviet representative to the U.N., opposed Mongolia’s membership in the U.N.

The 1950s and 1960s were no better. The Cold War between the U.S. and the USSR ultimately divided other global and regional players as allies and enemies, communists, and capitalists. This global instability did not help Mongolia’s case to join the U.N., since the Soviet Union still had enormous influence in Mongolia. After multiple failed trips to New York, then-Prime Minister Marshall Tsedenbal Yumjaa said in frustration during a December 7, 1961, speech, “For many years, the aspirations of the Mongolian people have been ignored. Because the United States employed discriminatory policies towards the Mongolian People’s Republic and Chiang Kai-shek and his group, who has long lost its reputation in the eyes of the world and the support of its people forever, the Mongolian People’s Republic’s desire to become a member of the U.N. has been protracted for 14 years. It is still unfulfilled.”

Indeed, Mongolia’s admission had become tied up with the conflict between Chiang’s Republic of China (ROC) government on Taiwan and the People’s Republic of China, which took over the Chinese mainland in 1949. Chiang still clung to the fiction of representing all of China – which, in his mind, also included Mongolia, despite his government having been pressured into recognizing Mongolia’s independence amid the Chinese civil war. The ROC government, therefore, strenuously opposed Mongolia’s entry into the U.N.

A declassified memo from the JFK era argued that “U.N. membership might provide Outer Mongolia with defenses against further encroachment by the USSR or Peiping [Beijing] in that area. Outer Mongolia will be less isolated, and the world organization would be alert to developments there. It would be a generally popular action for the United States to take in the United Nations.” Disregarding these known advantages, on February 1, 1961, Kennedy’s White House reached the opposite conclusion: “Weighing the foregoing considerations; it appears that on balance our national interest would be best served by continuing our opposition to the admission of Outer Mongolia to the United Nations.”

However, these barriers did not stop Mongolia from pursuing diplomatic relations with other nations around the world. The fact that Mongolia was establishing bilateral relations with other countries, including Western countries, reflected positively on Mongolia’s independence and its foreign policy as a whole. As well-known Mongolian studies scholar C.R. Bawden wrote, “Since joining the U.N. in 1961, after some hard campaigning, Mongolia further consolidated her world status by exchanging diplomatic recognition with a number of Western countries – in the first place in 1963, with the United Kingdom.”

On October 27, 1961, the U.N. Security Council passed Resolution 166, admitting Mongolia’s to the U.N. with nine votes in favor and one abstention – the United States (the ROC, which still held China’s UNSC seat at the time, did not participated in the vote). On that date 60 years ago, the Mongolian delegation – led by the first deputy minister of the Foreign Ministry of the MPR, D. Tsevegmid, Ambassadors B. Jargalsaikhan and B. Dashtseren, and diplomats O. Damdindorj, B. Orsoo, and B. Vanchin – witnessed a turning point in Mongolia’s history.

Fifteen years since its first application and thanks to the tremendous effort made by Tsedenbal and many before, Mongolia was now a fully fledged member of the U.N.

Since joining the U.N., Mongolia has ratified U.N. treaties and conventions and has been an active member in U.N. peacekeeping missions in the Middle East and North Africa. Mongolia has also participated in UNESCO, the U.N. Human Rights Council, and other significant initiatives. In 2019, the U.N. Peacekeeping Mission recognized Mongolia’s contribution in Western Sahara, Democratic Republic of Congo, Liberia. and South Sudan.

According to the Mongolian Mission to the U.N, “Mongolia initiated more than 70 resolutions in the General Assembly, of which 10 were adopted in the past five years.” Those include resolutions on “U.N. Literacy Decade,” “Support by the U.N. system of the efforts of Governments to promote and consolidate new and restored democracies,” “Improvement of the situation of women in rural areas,” and “Cooperatives in social development.” In addition, Mongolia’s non-nuclear weapons states (NNWS) status positions Mongolia as an important mediation actor within the non-proliferation treaty (NPT) in East Asia .

The Mongolian Foreign Ministry’s U.N. Week included a photo exhibition. Also as part of the event, for the first time in U.N. history, children representing 21 aimags and Ulaanbaatar wrote the U.N. Charter in traditional Mongolian script, Mongol bichig. The Foreign Ministry also organized a scholarly conference, “60 Years of Cooperation Between Mongolia and the U.N., and What is Ahead.” Foreign Minister Battsetseg Batmunkh and the U.N. Resident Coordinator, Tapan Mishra, made remarks to open the conference.

In a congratulatory message, Battsetseg stated:

For the last 60 years, Mongolia fully seized this opportunity, strictly adhered to the Goals and Principles of the UN Charter, and contributed to strengthening international peace and security, promoting social and economic development, and securing human rights, which are the three pillars of the United Nations activities. Today, Mongolia has established diplomatic relations with 193 countries of the world, became a member of more than 80 international and intergovernmental organizations, and acceded to more than 290 international treaties.

As Mongolia continues to be an integral part of the Asia-Pacific, its relations with the United Nations will only strengthen and expand. In the upcoming years, the United Nations and its agencies will play an important role in Mongolia’s implementation of its Vision 2050, a long-term development plan that aims to touch on issues of governance, human rights, education, and becoming a digital nation such as Estonia, Denmark, Israel, and Canada.